From Crossfit to Karate and just being an all-round busy person, I use various muscles in my body all the time. Before recovery milk came into my life recovery took forever, I struggled to consume multiple other forms of protein which certainly had a toll on my recovery. Since I have started my journey with Recovery milk, my body has been feeling better than ever before. I take my recovery milk straight after training or while I’m on the run during the day at work with no hassle at all. Recovery milk doesn’t only taste great, but it does wonders for me! 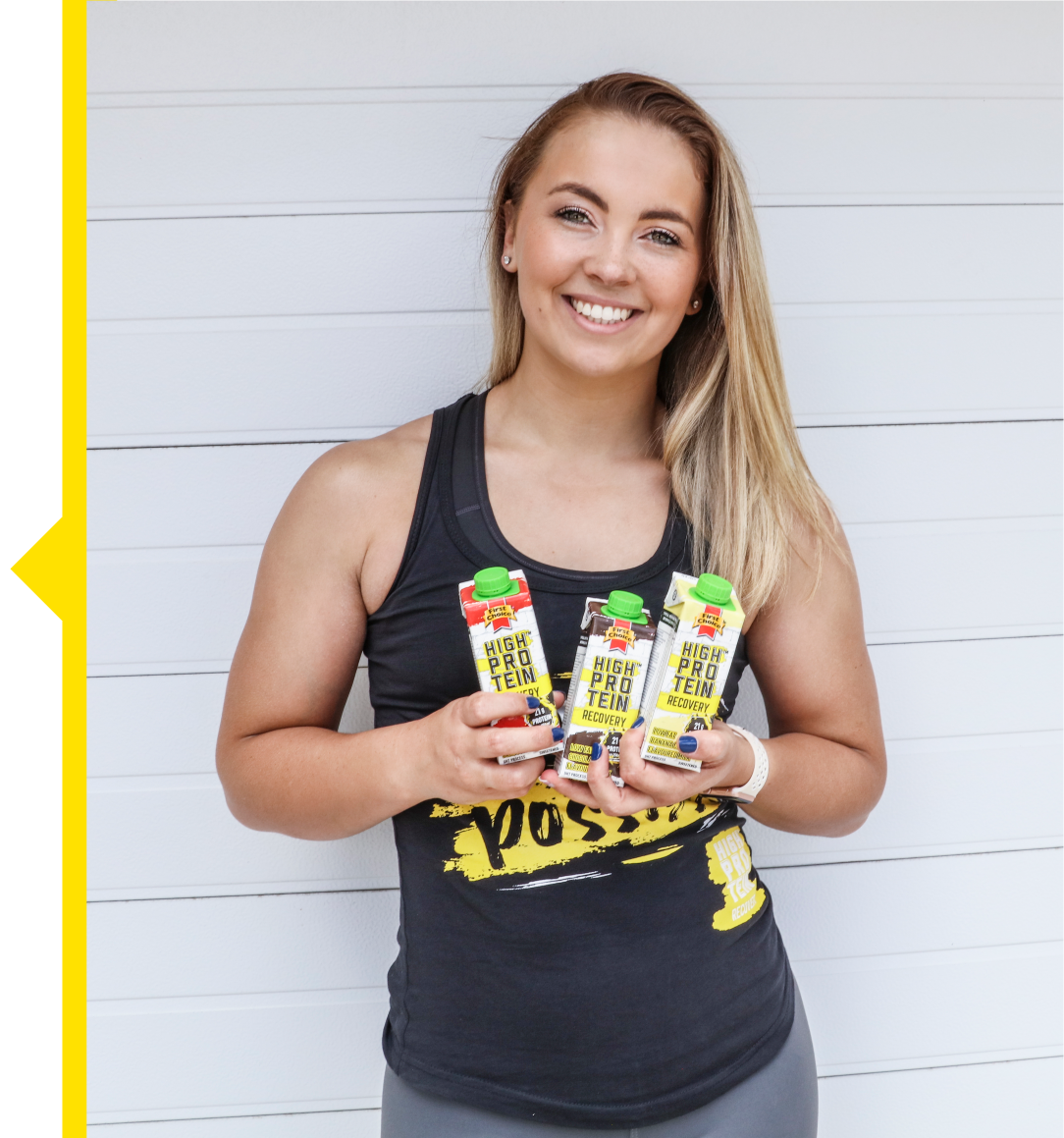 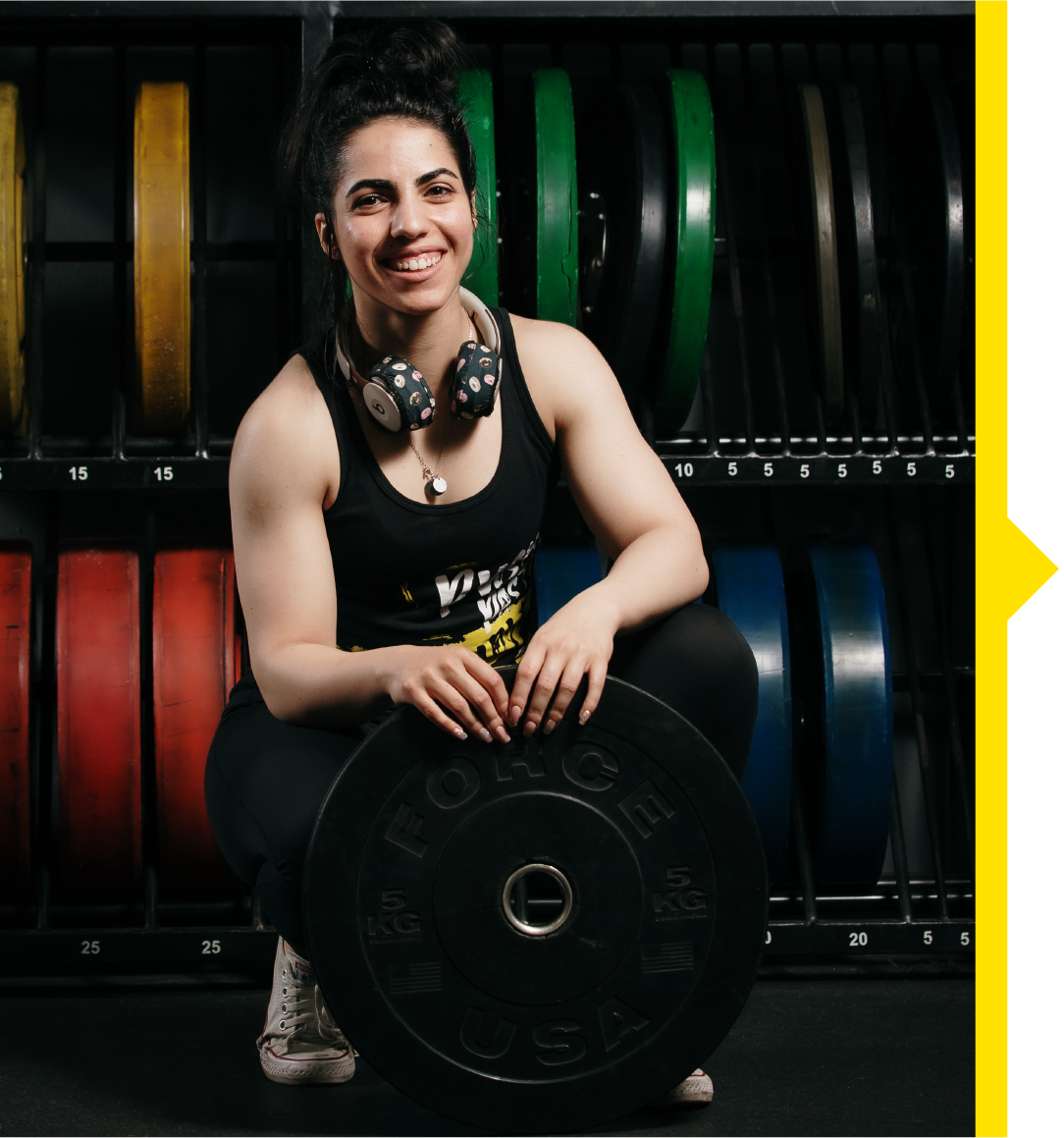 I’m Dani Da Silva but sometimes I’m known as Tiny She-Hulk. I’m an amateur female figure bodybuilder and occasional powerlifter. I entered into this sport with the initial intent of losing weight but then I fell in love with this sport. I love that I’m able to continuously test my body’s ability to grow and just how much I can lift. Over the years my ambitions have shifted from not only developing my own personal growth but to inspire other women to do the same. I use this beautiful sport as a way to remind both genders of the strength all women are capable of; it is not a natural-born talent, it is hard-earned and continuous ambitious work. With this being said, I always try to be the most hardworking person in the gym and of course, require every possible resource that helps better me as an athlete. My Recovery Milk is certainly one of those incredible resources and has certainly helped me in taking my training to the next level. Here’s to bigger, better and the always needed greater recovery.

Ethan is a first-year student at Stellenbosch University, where he is currently studying Bcom Management Accountancy.

As a first-year at university, he realises the importance of balance between studying, peers, and fitness. He feels that with First Choice’s High-Protein Recovery milk, he can live that balanced lifestyle without the hassle of long recovery periods between gym sessions.

He is a fitness enthusiast and sees the gym as his safe place and a daily necessity. Due to this daily necessity, First Choice’s High-Protein Recovery milk has become Ethan’s first and only choice. 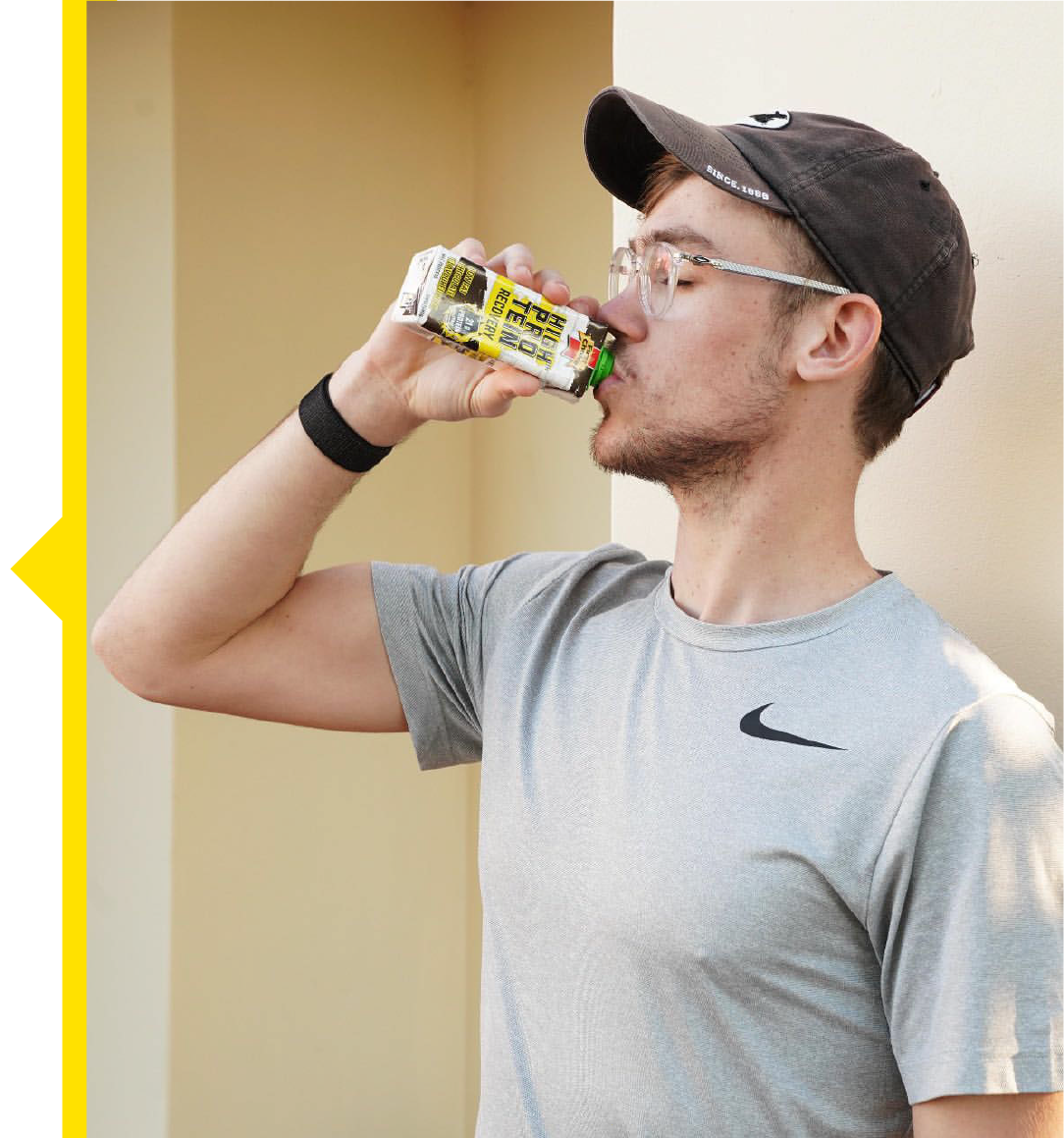 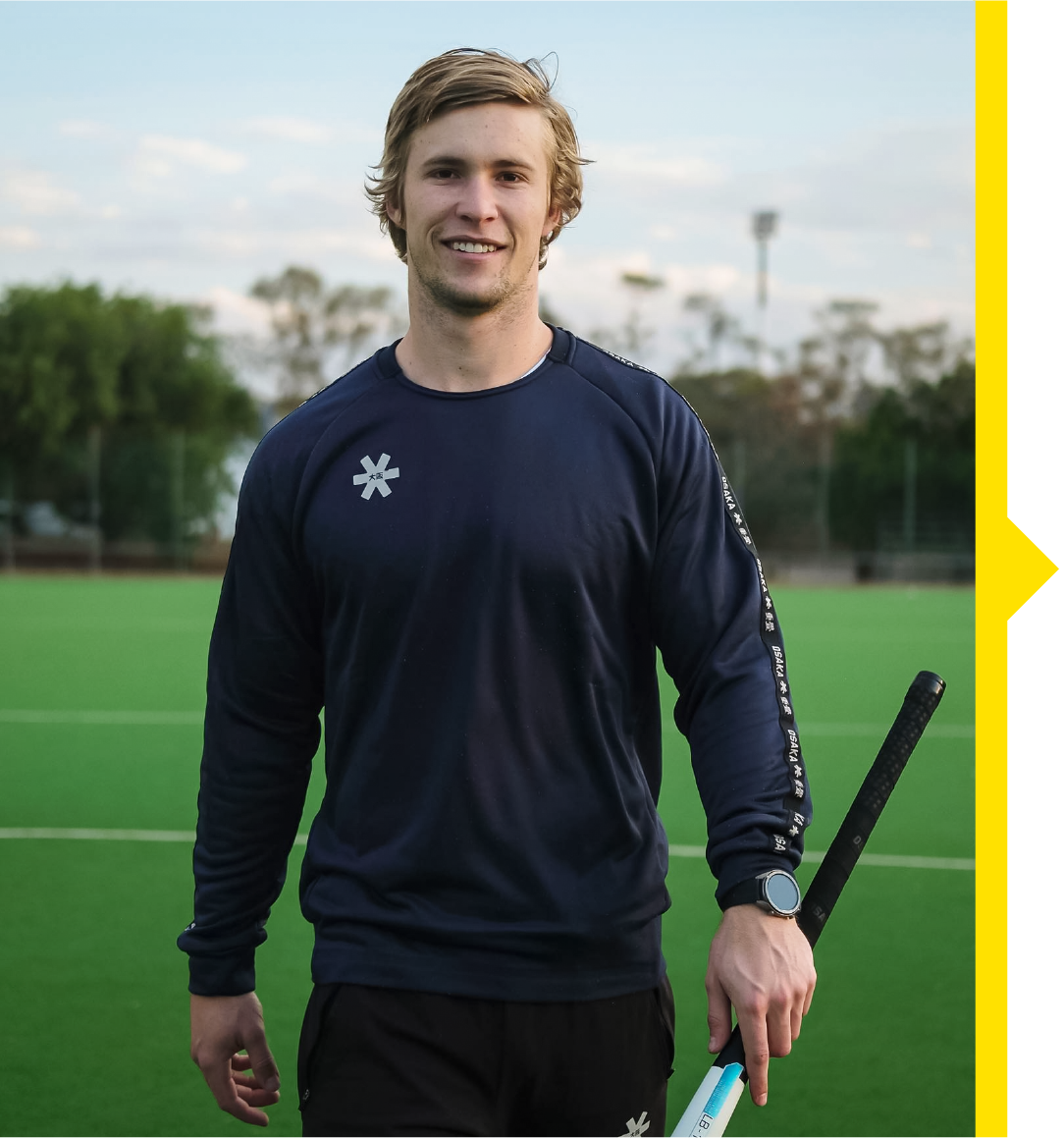 Hockey has been my lifestyle and sports investment since I was 7 years-old and I have endless love for the game. The older I get the more I think about giving back to the sport and trying to share my hockey knowledge and passion with the future generation.

My motto: Hard Work Pays Off. With relentless effort and determination, I will reach my audacious goals and hopefully leave behind a legacy that inspires others and invokes a desire to be better.

Recovery Milk is an important part of my hockey schedule as it helps refuel my body so that it’s ready to smash my next session. Looking forward to being part of the Recovery team.

I am currently contracted at the Vodacom Blue Bulls where I lately extended my contract. As a rugby player, recovery and being energized is essential. That’s why I chose HPR – to always keep me recovered and energized.

At the moment I’m playing U21 and will be joining the senior squad next year, where physicality is on a higher level. HPR is the perfect product looking after my body. 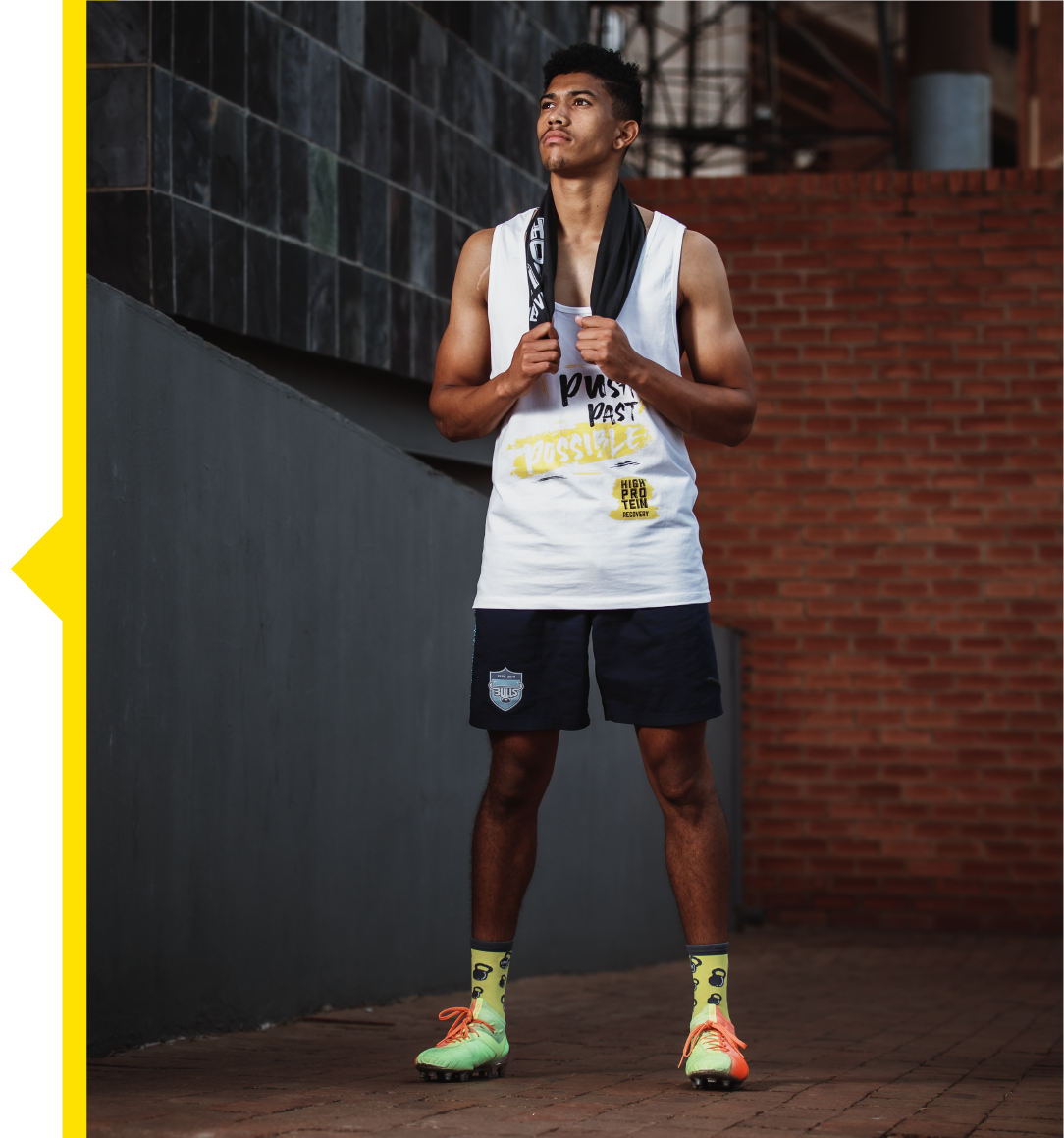 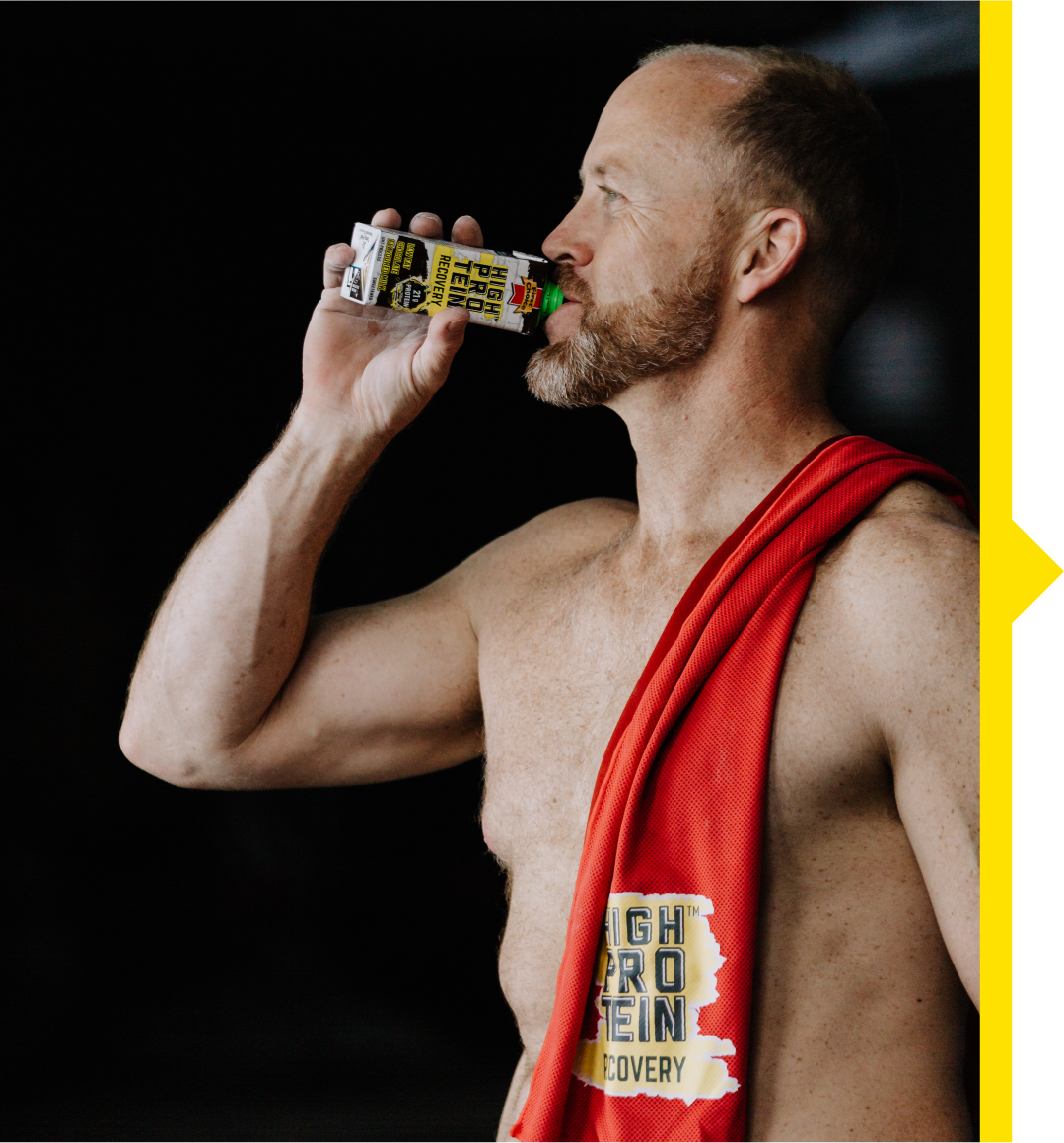 I have an undying passion to help and coach people to become the best version of themselves and I do that through good nutrition and high-intensity functional training. Being an avid CrossFit coach and athlete for nearly 8 years myself, I fully understand the importance and huge role nutrition plays in how we look and how we perform.

Since I’m aiming to be more competitive this year and stay in the top 10 in my age category, High-Protein Recovery Milk will always be a part of my training regime as I will constantly need to Refuel, Rehydrate and Repair.

Why Rugby? I believe Rugby is a sport for everyone. It doesn’t matter what body type you have, whether you are short or tall – there is a place in the team for everyone! The life lessons learned from Rugby really helps me, and the ladies I coach as no matter how hard the tackle (life) or strong the opponent would be, you get up, and you complete your journey. As my life motto says “Keep on Keeping on”.

With a hectic lifestyle like mine, I love on the go and convenient products. High-Protein Recovery assists my players and me tremendously in this specific way. Looking after yourself and your body is one of the key things I teach them.

We believe that we, as women, can make a difference – not just in Rugby but in life too! The same way we believe in High-Protein Recovery Milk and the change it has made in our lives. 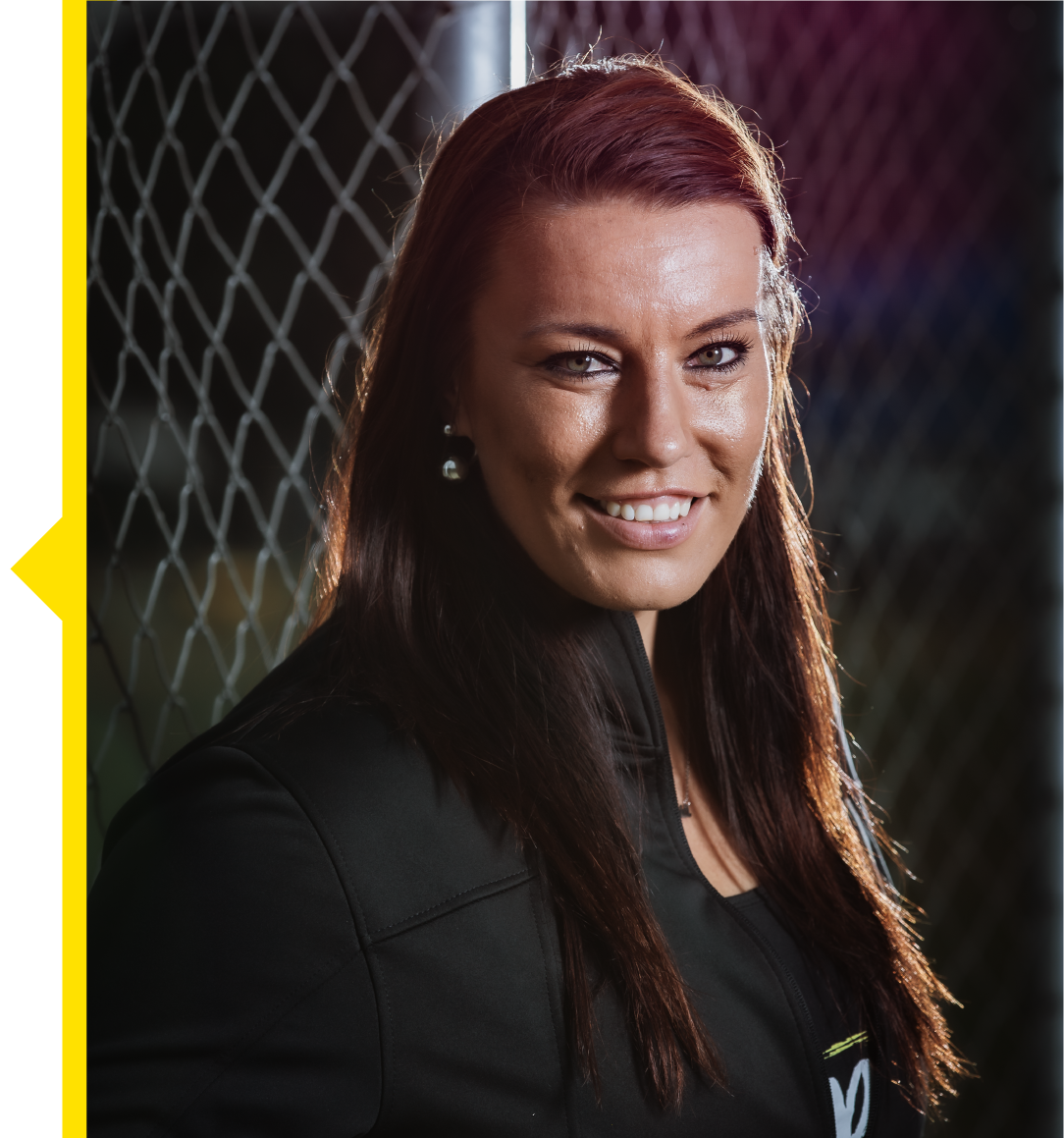 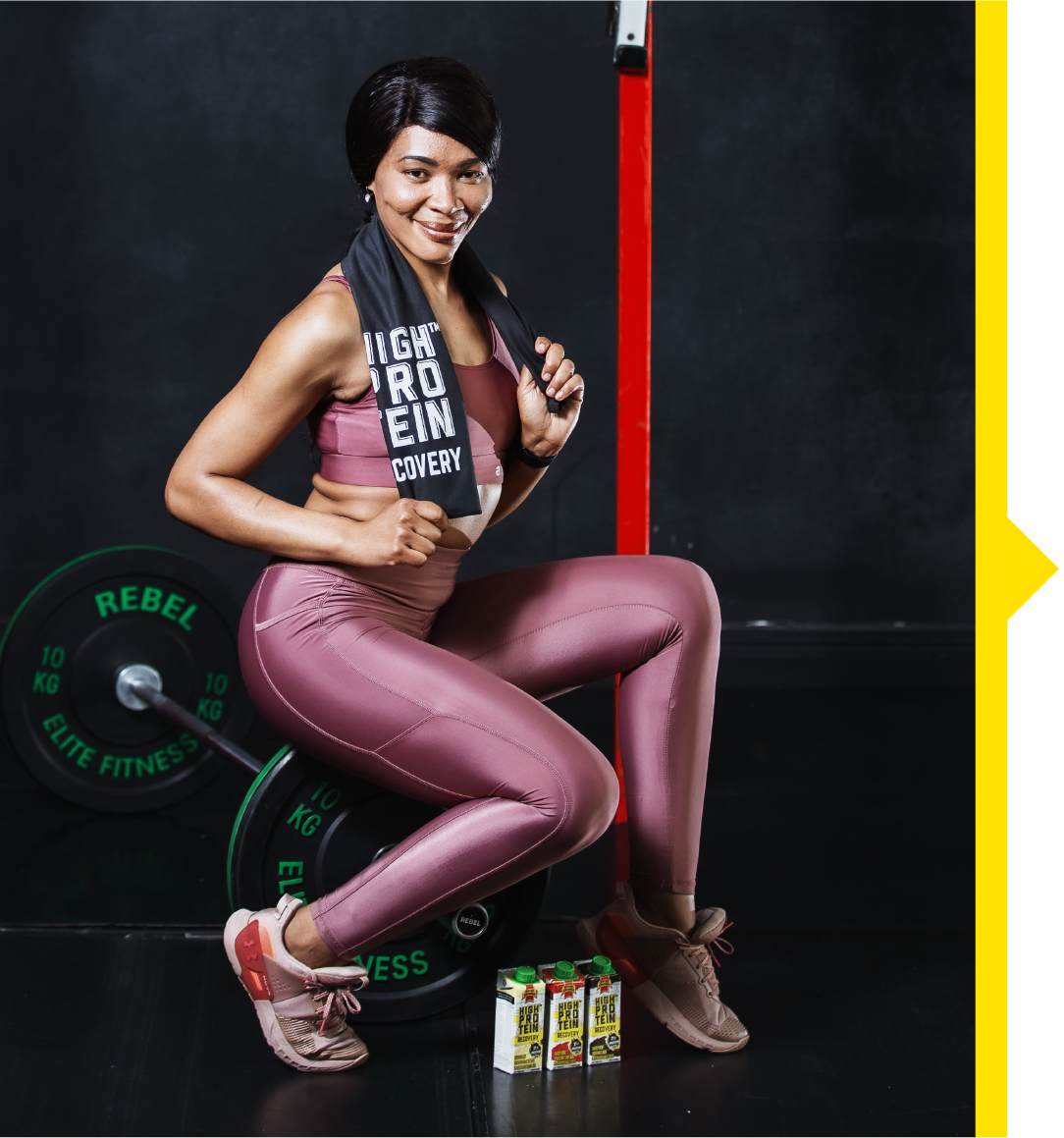 A professional fitness trainer with a national diploma in sports management from Vaal University of Technology awarded in 2007. She is also a certified Group Training Instructor and Personal Trainer, amongst other numerous certifications.

She was featured as the in-house trainer on Big Brother Africa in 2014 and subsequently went on to feature in a variety of  television programmes such as Mzansi  Insider  (Lifestyle programme) on SABC1 and PLAYnetwork show  on SABC3. She also partnered with Soweto TV in 2014 to do a documentary on Obesity in South Africa.

She is a former Adidas ambassador, and participated in the Women’s Health next fit star competition where out of 100 entries, she was named as one of the top 5 finalists. She has featured on Women’s Health magazine, Fitness magazine South Africa and was the cover girl of Fit Life Magazine and Tribal Fit  magazine in 2019. She came as 1st runner up for the Under Armour most hard core trainer competition 2019 -2020.

Botle’s philosophy focuses on continual enduring learning as she collaborates with clients in enhancing their well-being by empowering them with the knowledge, skills, support , guidance and inspires them on their journey to a healthier life. Her passion about health and fitness and her focus in helping people realise the importance of living a positive and healthy lifestyle is what sets her apart.

She recently received an honorary award by  the Vaal District Municipality for her outstanding work that has impacted and influenced her community in a positive way.

Capetonians have a team that they can truly call their own. A team of the City, by the City: Cape Town City FC became a reality in 2016 through the vision of local businessman and former professional soccer player John Comitis. The team aims to be truly based within the community of Cape Town, with not only support- but input and feedback- from the fan base being of paramount importance to the club. As a disruptive force on the local football scene, CTCFC do things differently, consistently involving fans from all over Cape Town. As an inclusive club with roots in Nyanga, the Cape Flats and the City Centre, CTCFC are able to have a supporter base that is truly representative of Cape Town and the rich football culture of the city.

The community development project DreamClub100 includes and empowers all amateur youth clubs in Cape Town, creating lasting relationships, while giving youth in Cape Town a clear path to achieving their professional football dreams at Cape Town City FC. This determination and inclusivity is what has seen the club create success in such a short time as well as a story that the entire country continues to fall in love with. Family Night Football used to be a tradition in the Cape and Cape Town City FC is resurrecting that tradition by playing home games right in the heart of the City at the iconic Cape Town Stadium. This is a ritual that Cape Town City FC believes is finally uniting the city in football. This is a club with a difference – one that works closely with the City of Cape Town and the wider communities to truly engage and create a football team as unique and diverse as the city it calls home. 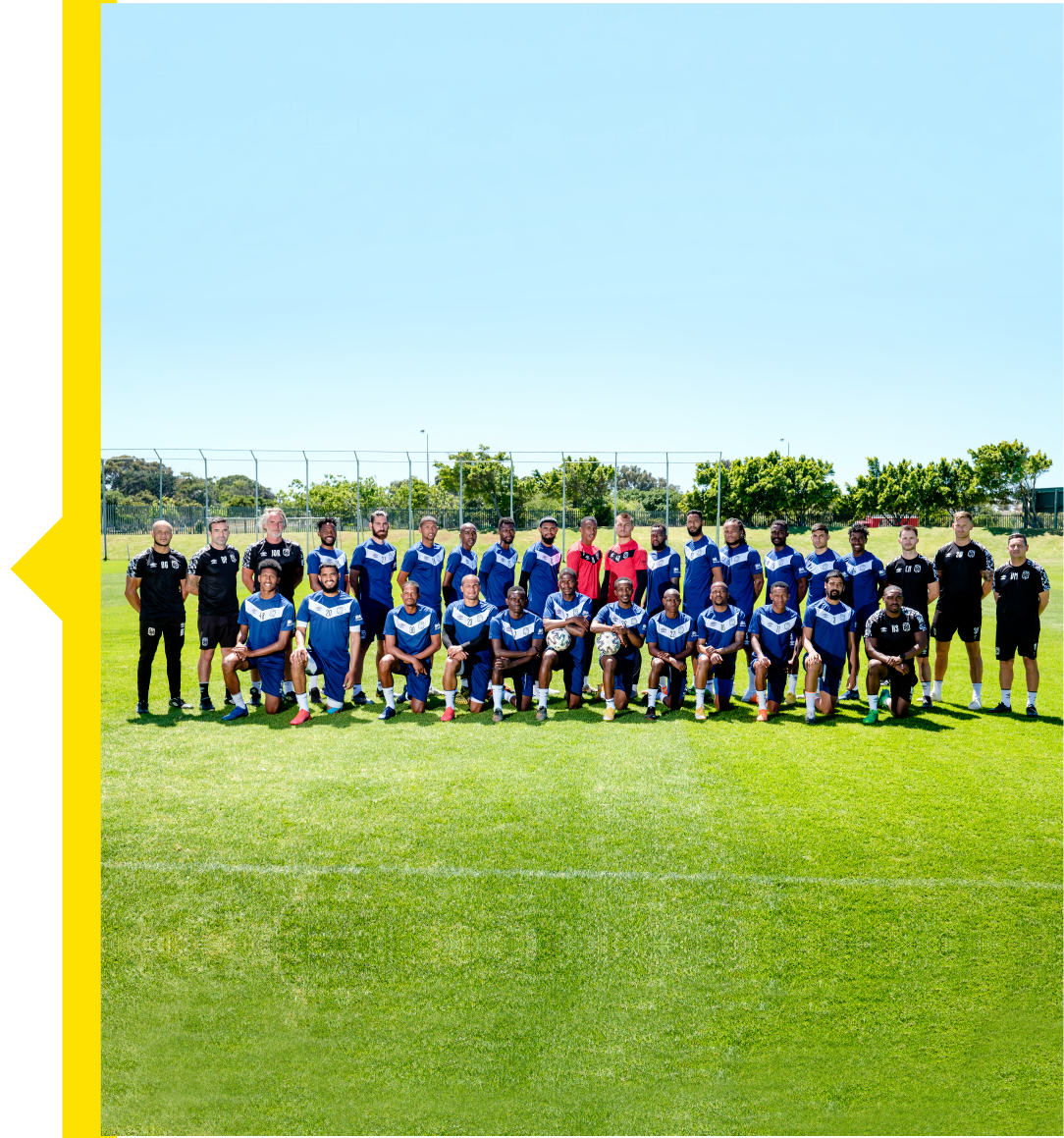 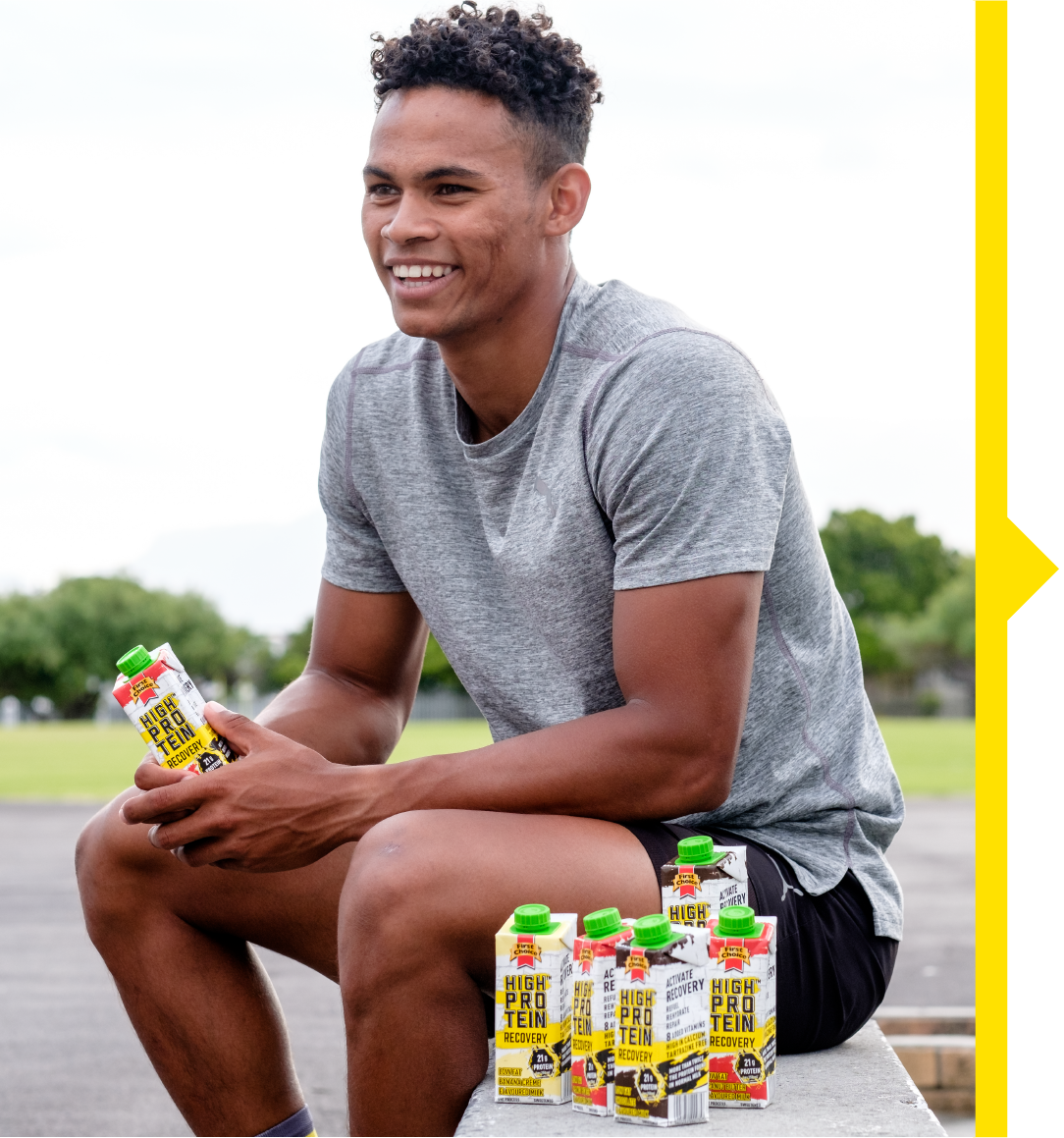 I’m Kyle Saunders but sometimes I’m known as Koffie. I’m from Mitchell’s Plain and I’m a living example of the truth that work hard and sacrifice can create opportunities. I’m a South African Tag Rugby player and PT teacher for Foundation phase at Panorama Primary School. I never thought I’d end up in education but it pushed me out of my comfort zone and has given me so much more purpose and perspective – wow, it’s been such a blessing.

I am so passionate about all I do when it comes to sport and just living life. I was never the best at sport but the burning passion I have has always pushed me to grow and develop as an all-round athlete. I completely love sport, staying fit and being able to inspire and motivate young athletes which is a true blessing for me. But it’s more than that – it’s about expressing my God-given talent and creating hope that shows that you don’t have to come from much to achieve greatness. All you have to do is really work hard, be disciplined and sacrifice because somewhere along the line someone will see your hard work and it’ll be appreciated beyond measure.

Nothing has ever come easy in my life and this is my way of showing that the hard way, the right way, the sweat, the tears, the disappointments, the good parts are all part of God’s plans. All you have to do is look up and say thank you.

I am super excited to walk this journey with Recovery Milk as it has been pushing me past possible because when training is finished… oh it’s all in the HPR milky 😍 the best part of my day!!

My name is Candice De Mendonça. I am a sports nutritionist and personal trainer with 12 years of experience. I thrive on helping others achieve their goals and overcome challenges they might be faced with.

I have personally run cross country for South Africa, represented Gauteng in swimming, athletics, hockey, soccer and indoor soccer. I love sports and this is what personally led me to study Sports Development at UJ, along with Personal Training and Sports Nutrition which has made a world of difference to my expertise.

I have always preached that low-fat chocolate milk is a scientifically proven as a sports nutritional aid, and when I discovered First Choice’s High-Protein Recovery Milk (HPR), I felt like a child on Christmas morning! In my opinion, HPR is literally the best post-workout recovery aid out there! With no digestive issues, it is easily absorbed and well used by the body. Thank you HPR and First Choice for this amazing product you have revolutionised Sports Nutrition in South Africa with HPR.

A motto I’d like to share with you all that I heard for the first time when I started running cross country at 5 years old from my coach(I never forgot your words or your name Mr Scott): “Quitters never win and Winners never quit – (unless you’re a smoker 😂)!” 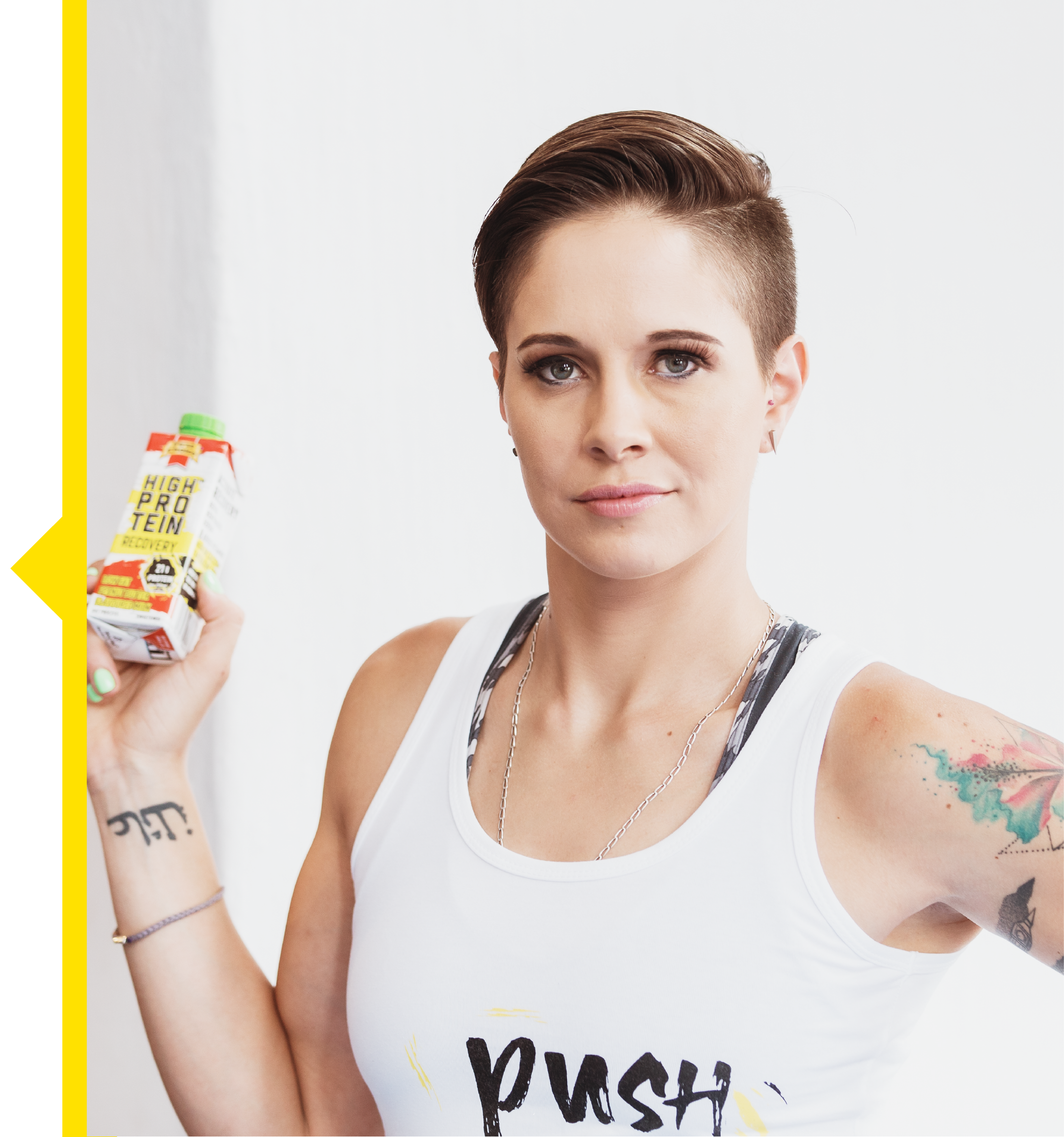 HPR is loaded with everything that’s good for you to push through your own limits again and again. Often the difference between good performance and average performance has to do with how you fuel your body and help your body recover. HPR helps you to Push Past Possible.

If there's anything you want to know feel free to contact us or jump into our FAQ - it's pretty helpful.